"Global Embrace" Tour Needs Donations and Crowdfunding Investors
Jazzical Music will help orchestras through a unique and innovative program. With crowdfunding investment, Clovice will perform his piece entitled “The Score” in at least two cities on each of the continents of Asia, Africa, North America, South America, Europe, and Australia - a minimum of 12 cities in all.

The crowdfunding campaign will fund a “Global Embrace” tour to the initial 12 cities, and pay $5,000 to each orchestra to perform the piece. It will also fund the production of a book and a movie documenting the journey, and to create a template for revitalizing struggling symphonies. The book, entitled “The Score: A Composer’s Journey”, will describe Clovice's life as a musician and composer. The book will also describe how the “The Score” was composed, and the adventure of traveling to perform it... the people met, the situations encountered, and so on. The DVD movie, entitled “The Score: A Global Embrace”, will document the actual trip, how music bridges cultures, conversations about strategies to revive orchestras worldwide, and will feature a composite performance of “The Score” by the various orchestras.

If you wish to make a contribution directly to Jazzical Music for the "Global Embrace" Tour you can do so for any amount here:
Blue Wing - 5/16
Clovice will return to the Blue Wing Saloon in Upper Lake to play jazz on May 1, 2016 on a Monday evening to be announced between 6:00 and 8:00 PM with Paul Kemp on keyboards and Machiko Shimada on vocals.
"The Score" Performed in St. Louis on March 6, 2016
The University City Symphony Orchestra, under the direction of Leon Burke, performed all four movements of "The Score" with the composer, Clovice Lewis, playing the solo movement for cello and orchestra, on March 6, 2016. The performance is part of the orchestra's 2015-2016 season-long celebration entitled "Black Art Matters". The concert was in St. Louis, Missouri at 3:00 PM at the John Burroughs High School. This concert is the first in a crowdfunding campaign to fund the "Global Embrace" Tour.

Below are the remarks made by Clovice A. Lewis, Jr. just prior to the University City Symphony Orchestra performing "The Score". Click here to view the University City Symphony Orchestra performance of "The Score".
Unitarian Universalists of San Mateo - 8/16/15
On Sunday, August 16, 2015, Clovice led the service at the congregation of the Unitarian Universalists of San Mateo, CA about how black lives matter. The music Clovice performed were an excerpt from the Sonata for Cello and Piano in E Minor by Johannes Brahms, his own composition with his wife, Carol called "Someday", and "The Oneness of Everything" by Jim Scott. See below to view the music performed and the sermon Clovice delivered entitled "Compassion, Justice, and Equity in Human Relations".
"Word Weaver" Radio Show - 12/20/14
On December 20, 2014, Clovice was interviewed by Carolyn Hawley on her "Word Weavers" radio show. The show featured a discussion with Clovice along with recordings of works representative of his creative development. Click here to listen to the entire show on YouTube.
Creativity Cafe - 12/10/14
Clovice was interviewed at the Creativity Cafe by Katie Curtin and Denise Rushing about his views on creativity and how he stays so happy all the time. Katie Curtain, the moderator wrote the day before:

"He describes his daily state of being as anything from happy to ecstatic. I am so curious about how he maintains his good spirits despite all the daily challenges of modern life. And that's just one of the topics we'll be delving into. I can't wait!"

Sign up on the Creative Cafe site to hear a replay of the interview.

Soper-Reese Theater - 11/23/14
Clovice performed "Love's Embrace", the third movement of his latest symphonic work entitled "The Score", on November 23, 2014 with the Lake County Symphony under the direction of John Parkinson. 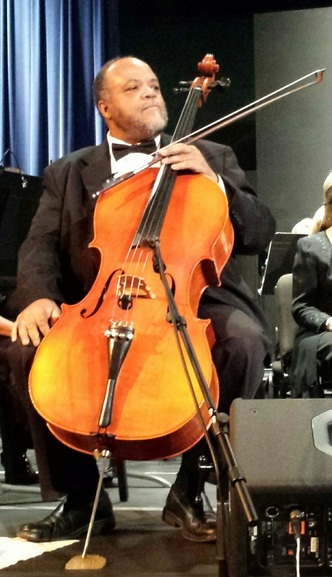 This image was snapped during the introductory eight measures just before Clovice began playing "Love's Embrace" on November 23, 2014 with the Lake County Symphony Orchestra.
Blue Wing - 10/5/14
Clovice played jazz at the Blue Wing Saloon in Upper Lake on October 5, 2014 between 6:00 and 8:00 PM with Paul Kemp on keyboards and Machiko Shimada on vocals. 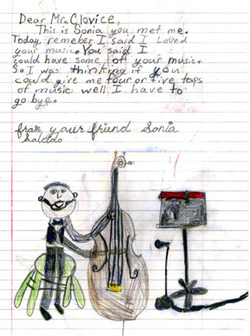 Music at the Tallman

Clovice sat in for a few pieces with Robert Culbertson, undoubtedly one of the greatest Chapman Stick players on the planet. Robert and Clovice played together on February 27, 2009 at the Tallman Hotel in Upper Lake, California.

Clovice performed with the Lakeside Chamber Players at the Tallman Hotel in Upper Lake, California on May 15, 2008. This performance marked the second year when Clovice, Carolyn Hawley, and Catherine Hall performed original "Jazzical" compositions by Clovice. Christine Noble and Keely Southwick to also performed ballads and love songs.


Also...
In 2002 Clovice performed at the Upper Lake Elementary School in the Clearlake, California area. We thought you'd enjoy this rave review from Sonia Salcido as much as we did.


Clovice Lewis', Two Poems for Bassoon and Orchestra was premiered on May 9, 1998 with the Nova Vista Orchestra, Emily Ray Conducting. The piece received great a glowing review from the Los Altos Newspaper.
Proudly powered by Weebly